What is an Italian Beef?
An Iconic Chicago Food, Explained 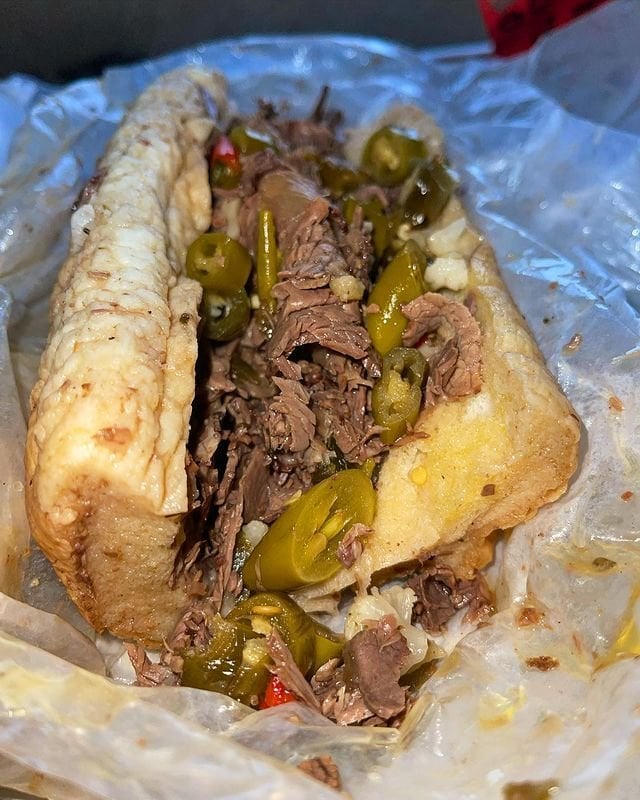 When you sink your teeth into an Italian beef, you’re tasting a culinary superstar, a chaotic, delicious, mass of meat, bread and condiments. An Italian beef sandwich is as Chicago as deep dish pizza. Take one bite and you’re savoring history, the essence of Chicago style and a point of pride.

Chicagoans take Italian beef seriously. This beloved sandwich has been a local staple for generations. It may not be neat, but it’s a part of the culture.

Meathead Goldwyn, a Chicago cookbook author and barbecue expert, described Italian beef in a Chicago Tribune article as: “just a stinking mess. ... But all combined it is an interesting flavor, and it’s a taste of Chicago. It’s like rooting for the Cubs.”

Dig into this Q&A with commonly asked questions about Italian beef and you’ll soon be an expert on how it’s made and where to find the very best versions.

Q: Is an Italian beef pretty much the same as a roast beef sandwich?

A: Not exactly. For the record, die-hard Italian beef lovers might take offense if you suggest the two sandwiches are the same!

The popular sandwich features seasoned, thinly sliced roast beef piled on a long French roll and topped with Chicago-style giardiniera and/or roasted peppers. These are often dubbed as “hot” and/or “sweet”.

What really sets the Italian beef sandwich recipe apart is that it’s served au jus, the elegant French way of saying served “in the juice” that comes from roasting. When an Italian beef recipe is prepared, the meat (typically a top round or chuck roast cut) is roasted with herbs and spices—like basil, oregano, pepper and, sometimes, cloves—and water. (That’s in addition to the olive oil and garlic powder.) A rich and flavorful beef broth accumulates as the meat cook time lengthens. The beef is thinly sliced, then dunked into that tasty liquid and cooked awhile longer, so the meat becomes even tastier, making the sandwich mouth-watering.

Speaking of dunking, the entire sandwich itself is often briefly submerged in the juice before it’s served up to be devoured. “Wet bread” may sound like a wild idea, but your taste buds will thank you. If you’re eager to try this extra-juicy Italian beef, just ask for your sandwich “dipped.”

To add to its overall chaos, some prefer melted mozzarella or provolone cheeses. Veggies are the last step, with optional bell peppers, sweet peppers, giardinera, and/or pepperoncini topping off a glorious mess.

Q: What type of beef is used?

A: Italian beef can be made using sirloin tip, beef top round, or beef bottom round, all of which hails from the back of the cow. It’s lean and tough meat—and it’s also cheap. This is all part of the history of Italian beef, which stretches as far back as the 1920s.

Q: Whoa, Italian beef has been around that long? What’s the story behind the sandwich?

A: It’s unclear exactly where the story of Italian beef began. It dates back to the early 20th century in Chicago's famed stockyards where beef was plentiful. The theory is that Italian immigrants would bring home less expensive cuts of beef, roast them slowly, and serve it up thinly sliced on bread for large gatherings. It burst onto the culinary scene at big Italian-American weddings in the 1920s, known as “peanut weddings.” To keep costs low, weddings were held in church basements and private homes, and guests were served peanuts and other inexpensive eats. When it came to serving as many as possible well but inexpensively, Italian beef, with its super-thin slices of meat, proved a perfect solution.

If you’re wondering who gets credit for coming up with the sandwich, there isn’t a definitive answer. Some say it was Anthony Ferrari, a food vendor who made sandwiches and other food in his home and dropped the meals off to blue-collar folks throughout the city. Others say the Italian beef originator was Pasquale Scala, who sold food from a street cart on Chicago’s West Side around the same time as Ferrari. Scala’s bread and butter was beef—that’s what he mostly sold.

Yet another theory? That the Italian beef is a play on the French dip, a sandwich created in Los Angeles in the early 1900s. One longtime Chicago restaurant critic claimed that a guy working in a Greek diner tweaked the French dip recipe and gave birth to Italian beef.

However you slice it, two things are certain. One, Italian beef is a Chicago icon, regardless of the creator. And two, the names connected to Italian beef’s origin stories gained fame and steady business. Anthony Ferrari’s son, Al, went on to open Al’s #1 Italian Beef in Chicago’s Little Italy neighborhood. Adored by many, Al’s Beef is known for stellar Italian beef. And here’s a fun fact: Back in the day, the original Al’s stand was a front for illegal gambling. Food orders were taken out front while gambling secretly went on in the back of the restaurant.

Q: Where can I find the best Italian beef around Oak Park?

A: You don’t have to look far to find an exceptional sandwich in the wider Oak Park Area. With so many mouth-watering options, we won’t tell you who’s best. We’ll let you figure that one out for yourself.

If you’re heading into the city, there are no shortage of Chicago beef options. There’s Al's #1 Italian Beef, of course, which has several locations. Other meaty picks in Chicago include:

A treasured Italian deli and grocer, Bari is known for its sub sandwiches, but the Italian beef is also a winner.

Conveniently located in the Chicago Loop, Luke’s is a favorite among downtown workers and an easy stop for tourists.

Along with a great sandwich, Marco’s makes its own house giardiniera, a blend of carrots, jalapeno peppers, celery and crushed red pepper flakes. The restaurant offers the added bonus of easy parking in an attached lot.

The name says what this institution is all about. This no-frills classic is also a favorite of locals headed downtown.

Be sure to order a side of fries with Mr. D’s tasty Italian beef. The Chicago Tribune rated D.’s fries as the best in Chicago under $5.

This longtime Italian deli has been serving up great eats since 1968. After relishing the exceptional Italian beef, treat yourself to some of Freddy’s Italian ice for dessert. 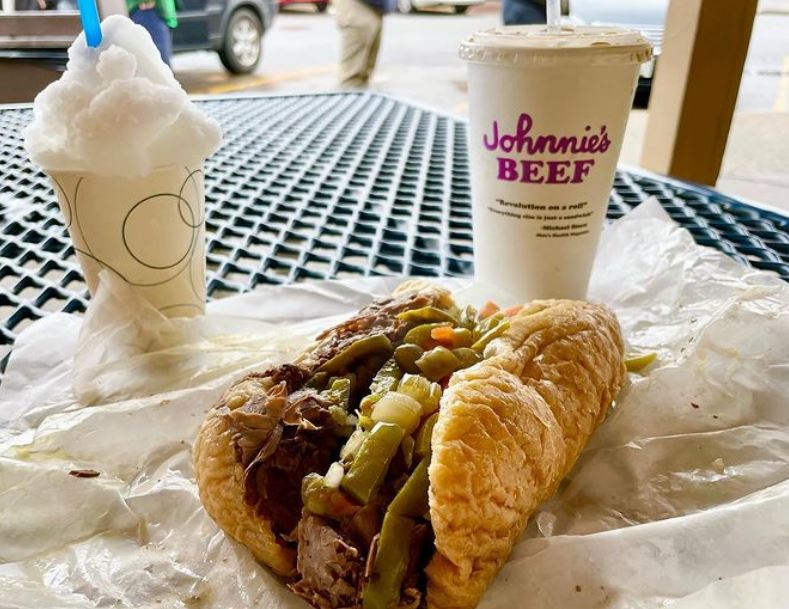 Many critics rate Johnnie’s as their favorite Italian beef spot. Expect lines out the door and a perfectly executed sandwich. There are two locations, one in Elmwood Park and another in Arlington Heights. The Italian beef is typically part of a combo sandwich that also features grilled Italian sausage. 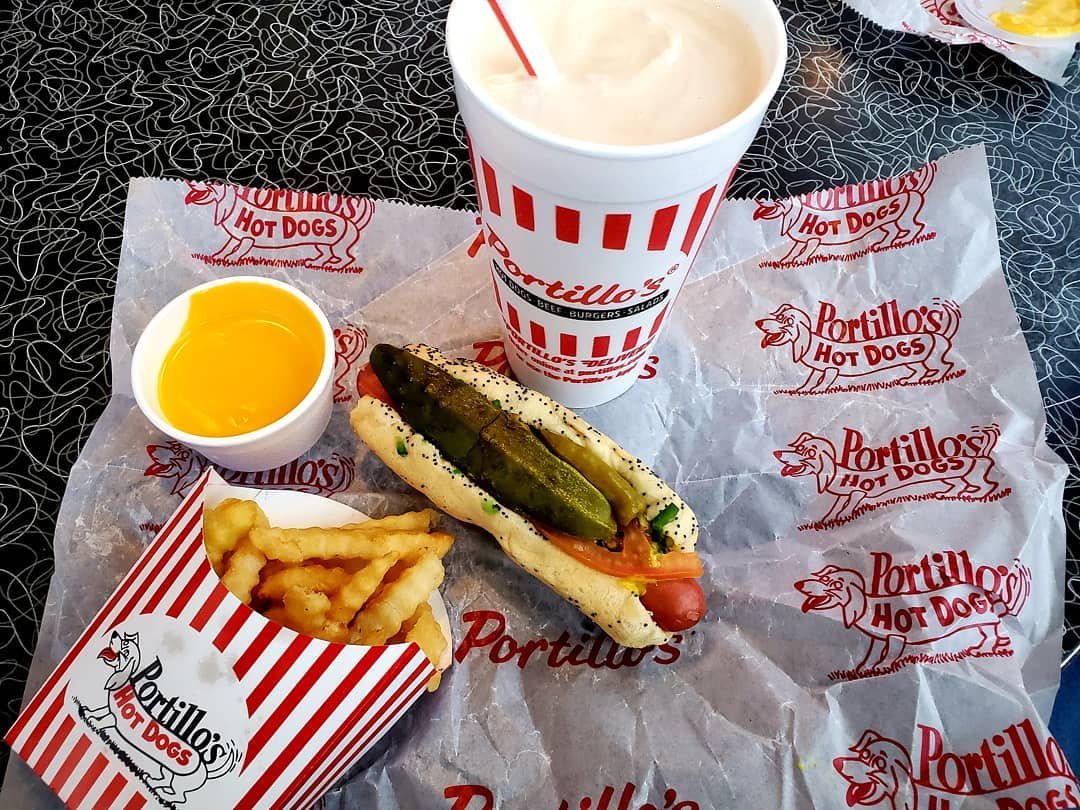 The toppings are ahead of the curve here. Bright orange and red peppers bedeck the sandwich and hot peppers come in the form of jalapenos and crisp celery. If you want a cheesy Italian beef, you can add American, provolone or liquid cheddar on top. There are three Jay’s locations; the original is in Harwood Heights.

Every city has its classic: New York City’s pastrami-on-rye, the Philly cheesesteak, the po’ boy of New Orleans. In Chicago, it’s Italian beef all the way. Whether you indulge in just one or 101 Italian beefs, Chicago’s cherished sandwich is sure to delight.